Re-Grip was just featured on WXIA-TV on the show "atl&co" with Candace Corey. Re-grip enables you to add a shock-absorbent grip to virtually any cylindrical tool handle with its easy-to-install system: just fit Re-grip over a handle, pull on the end of the yellow spiral core and watch the grip clamp itself onto the handle as the core unravels.

Product Gets a Grip on Handles

Re-Grip is renewing its a push in the tool repair market with a slogan that reads like instructions: “simply slip, zip, re-grip.” Re-Grip is a patented technology that places or replaces worn-out handle grips on a variety of tools, levers and handles.

Re-Grip To Be Featured on HSN December 6

Pat Roscopf & Business Partner Ryan Fogelman To Be Featured on HSN on December 6 and in the December issue of Good Housekeeping, Introducing To More Than 94 Million Homes.

Re-Grip selected as a HSN and Good Housekeeping Magazine finalist

Leading entertainment and lifestyle retailer, HSN, and Good Housekeeping magazine have selected nine finalists from more than 600 qualified submissions in their search to find America’s next great entrepreneur and game-changing consumer product. 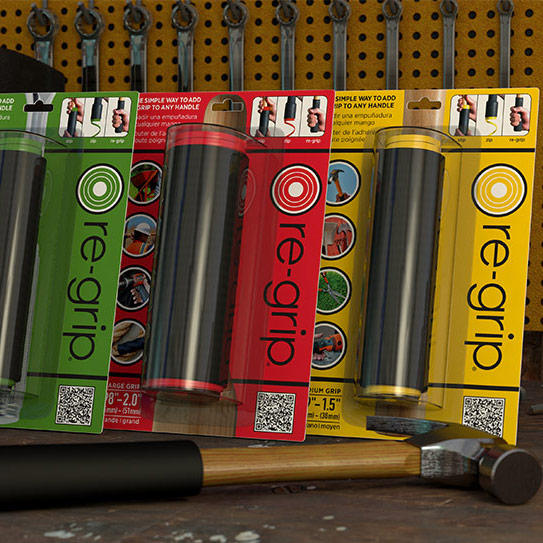 For more than 30 years Hardware Retailing magazine has been singling out the best of the best products at the National Hardware Show® with its Retailers' Choice Awards.

Re-Grip is featured on “I Want That”

Preval®, one of the country's largest manufacturers of spray products that deliver consistent, professional results has added Re-Grip® to its portfolio of products...

Re-Grip is ready to make a splash after receiving its new patent from the USPTO.

Quality home and garden tools are only as good as their grips: When a grip goes, a tool becomes useless.

Re-Grip Inc. has created the ultimate solution to minimize safety risk and have a positive financial impact.